Greystone has a unique and fascinating history. Explore the distinctive eras of Greystone’s history from 1914 to the present. 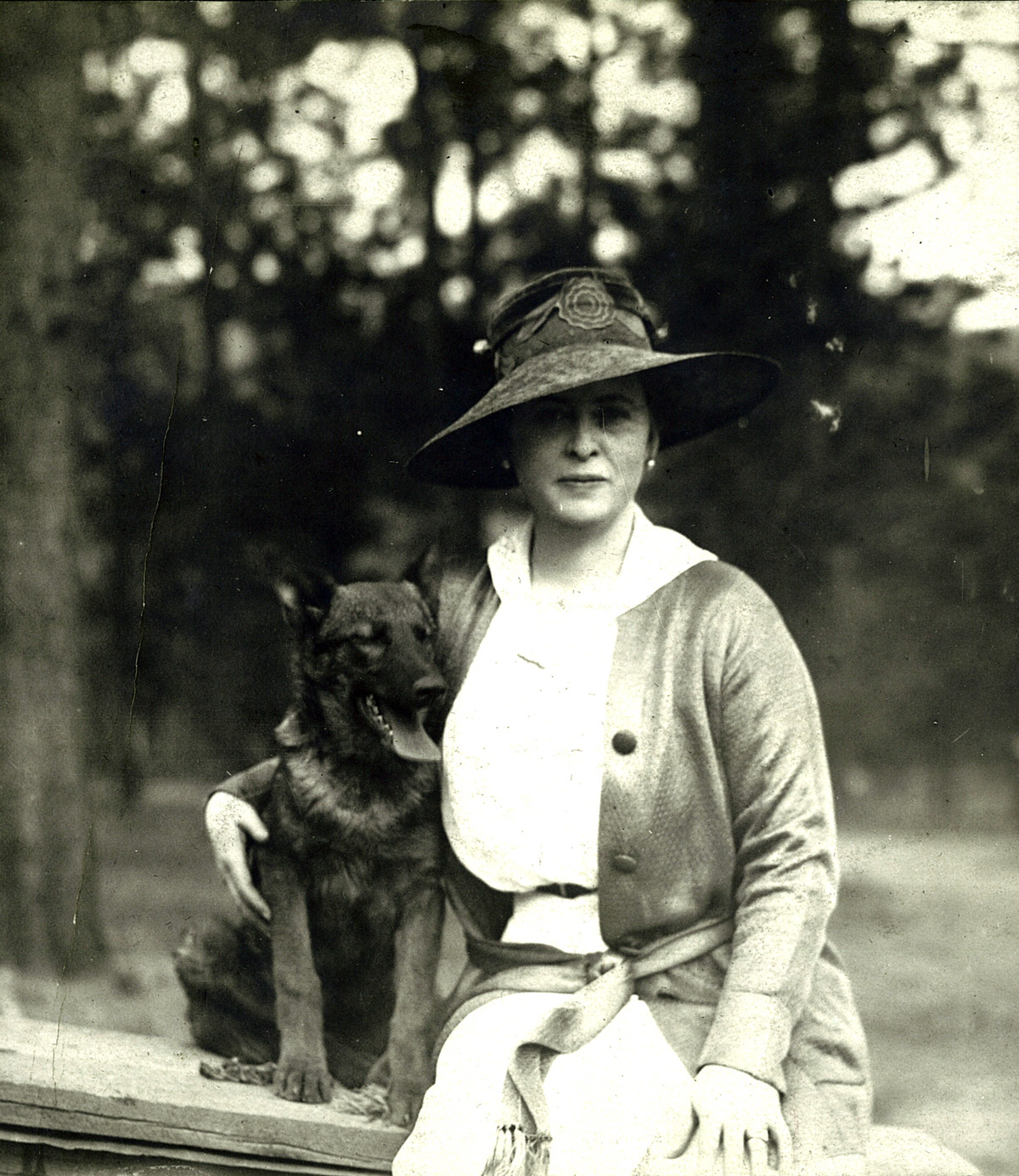 Genevieve Chandler Phipps was dubbed a “titian-haired” beauty with a voluptuous figure and bright turquoise eyes. Married at 18 and divorced by 25, she was a prominent Denver socialite, circulating with only the city’s elite and often seen driving in a luxurious 1914 Model 34 Marmon automobile, custom painted the identical auburn hue of her hair color. Credit: Roberts Family Collection

In 1914 at age 34, wealthy Genevieve Chandler Phipps purchased 1000 acres on Upper Bear Creek which would become the Greystone estate. Construction began on her new home in 1916. To accomplish what she envisioned, Genevieve stayed on site to supervise in a canvas tent adorned with Oriental rugs and antique furniture.

Construction was completed in 1917. She often entertained through the 1920s Prohibition Era with elaborate weekend parties and highly formal luncheons. With 12,000 square feet of living space in the Manor, in addition to several guest houses and servant quarters, prominent guests such as Utah mining millionaire, Samuel Newhouse and wife Ida, often stayed a week or more.

When Genevieve Chandler Phipps died in 1931, her daughters jointly inherited the estate. Their husbands, Donald Bromfield and Van Holt Garrett, had for years partnered the prestigious Garrett Bromfield Real Estate Company located in downtown Denver. Through their husbands’ firm, the women decided in 1938, it was time to sell. Read more. 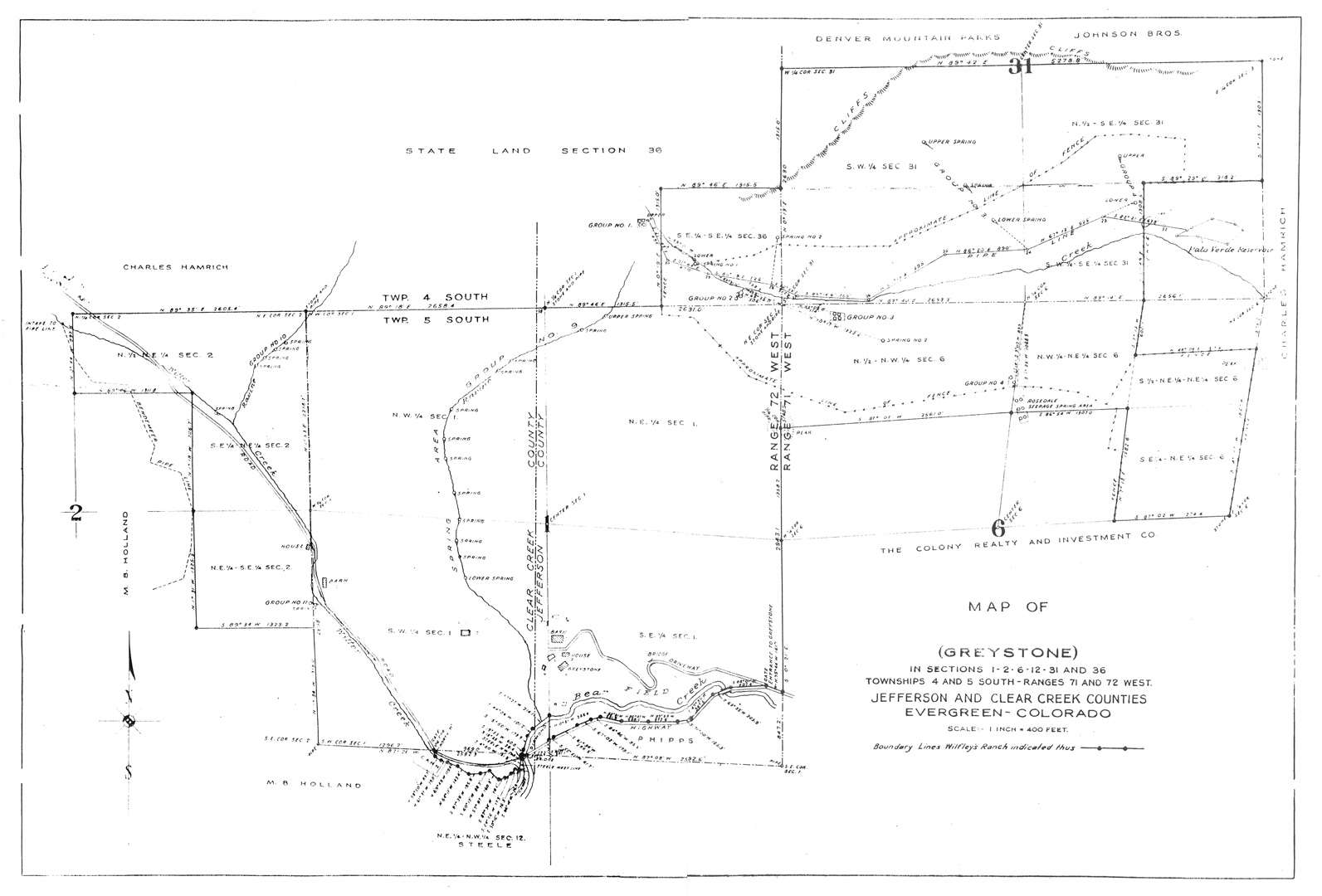 Elmer and Peg Wilfley purchased Greystone in August 1939. Elmer had dual intentions for his new estate – a working cattle ranch and a relaxing family haven. He purchased the adjacent Mayo Ranch and grew Greystone to over 1200 acres for 90 head of cattle and 6 horses.

By 1946 Peggy and Elmer’s children had families of their own and were unable to visit the estate as frequently. Sadly the decision was made to sell. But before Greystone could be listed, a prominent couple from Georgia happened upon Elmer while he was relaxing on his front porch. Lt. Colonel William Sandifer and wife Sadie were considering purchasing property neighboring Greystone and had driven up the Greystone drive on a neighborhood exploration. Within hours, Greystone was under contract for sale. Read more. 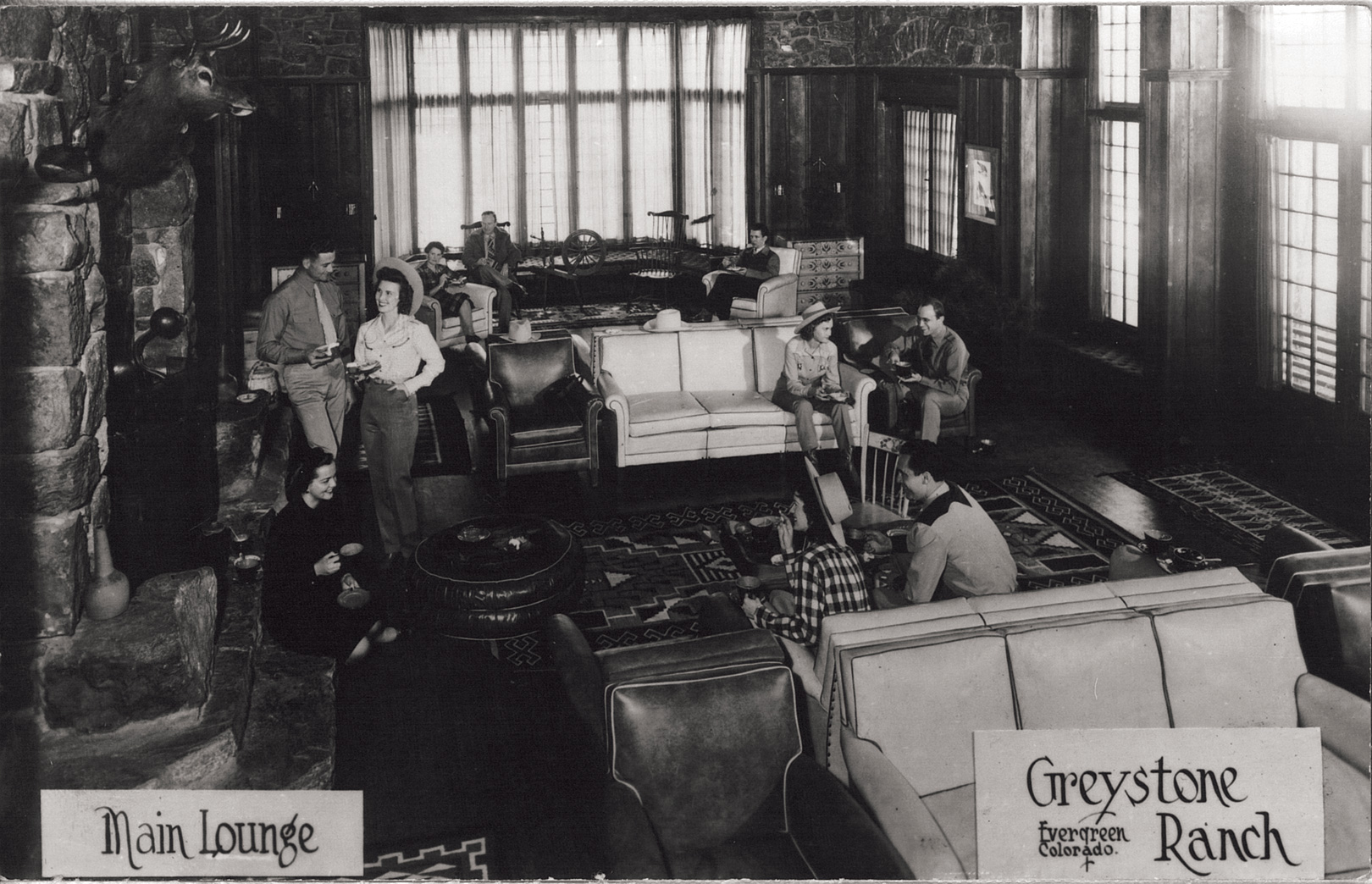 Greystone Ranch postcard of the main lounge in the Manor House. Each evening before dinner, guests congregated before the crackling fire to reminisce about their day on the ranch. Credit: Sandifer Family Collection

The couple from Georgia, Lt. Colonel William R. Sandifer and his wife Sadie, envisioned Greystone from the beginning to be a luxurious guest ranch. Sandifer became a self-made man known for his renowned engineering of the Empire State Building in New York City and the American Embassy in Tokyo. His wife Sadie, a woman of wealth from Deep South Alabama and first cousin to Lady Bird Johnson, was well accustomed to posh entertaining.

During the Sandifer Era, Greystone was subdivided three times. In the 1950’s, with his parents’ blessing, Bill Jr. subdivided 250 acres which became Greystone Lazy Acres. Then in the 1970’s, acting on his parents’ behalf, Bill Jr. sold 200 acres, which became Greystone Estates. At a later date, Bill Jr. and Marilyn, with children of their own, subdivided the remaining 800 acres and built a modest home and stables for their Arabian horses on 745 acres, leaving 55 acres remaining of the original Greystone Estate. Read more. 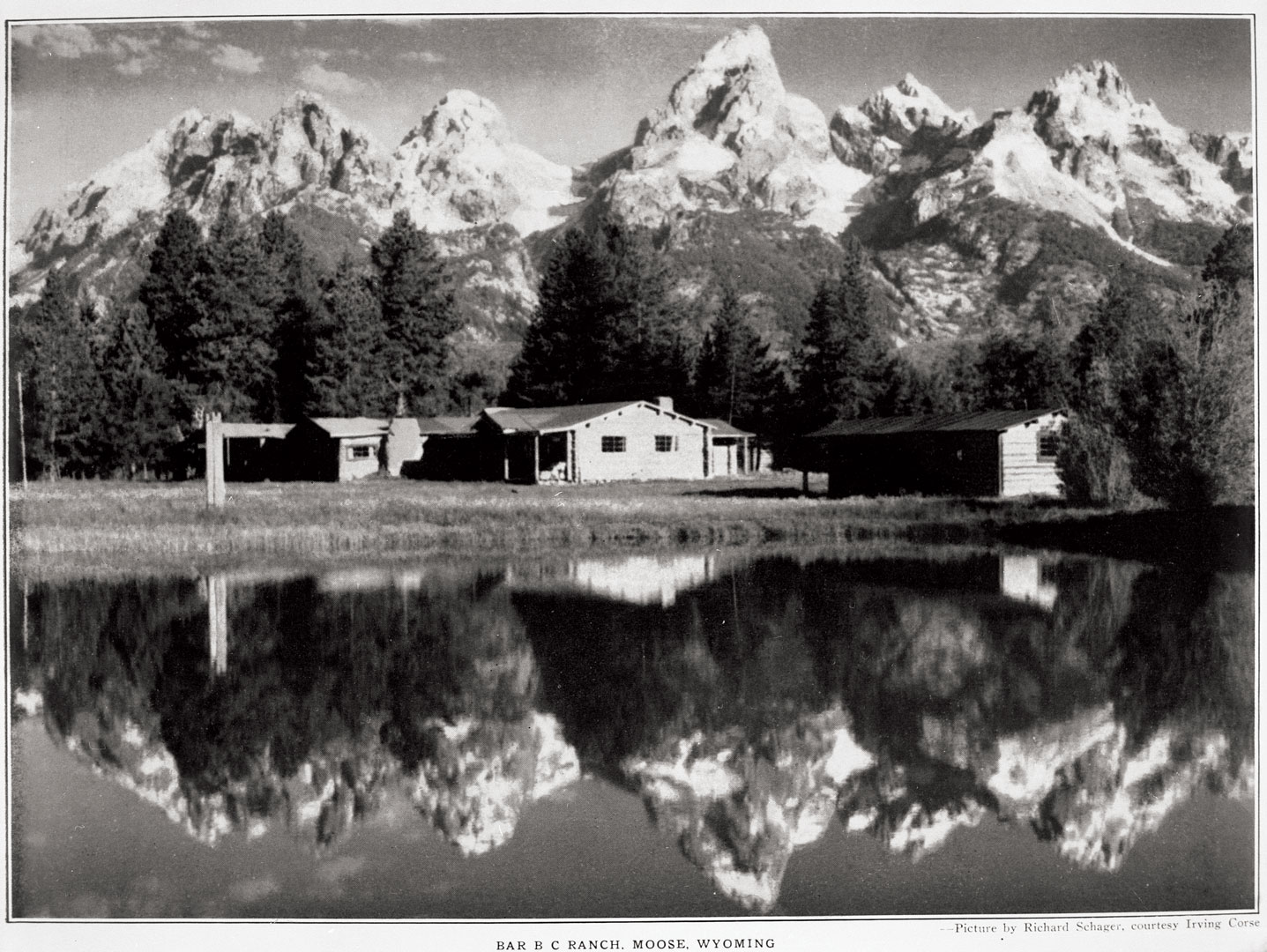 The legendary Bar BC Ranch in Jackson Hole, Wyoming, established by famous author and Princeton educated Maxwell Struthers Burt in 1912. In 1928 Burt purchased a 300 acre ranch, twenty miles north of the Bar BC, named the Three Rivers Ranch, from which the Historic Log Cabin was moved to its present home at Greystone. Credit: Jackson Hole Historical Society, #1996.005.001

Warren and Margery Burt Smith bought Greystone Estate in 1981, one year before the Burt family’s 50-year lease expired from the National Park Service on their ranch in Jackson, Wyoming. Assumedly, the Smith’s worked out an arrangment with the National Park Service, because shortly after moving to Greystone, an original log cabin from the Bar BC Ranch was permanently placed on the property. The cabin, no doubt, was to pay homage to Margery’s dude ranching heritage.

In 1987, Warren voluntarily filed for bankruptcy and Greystone was for sale in 1989. An Evergreen/Denver bachelor, Jerry Peterson, fell in love with Greystone and purchased it in 1991.

Greystone was then sold to Richard and Pamela Bard in 1992. Read more.

The Era of Richard and Pamela Bard 1992 – Present 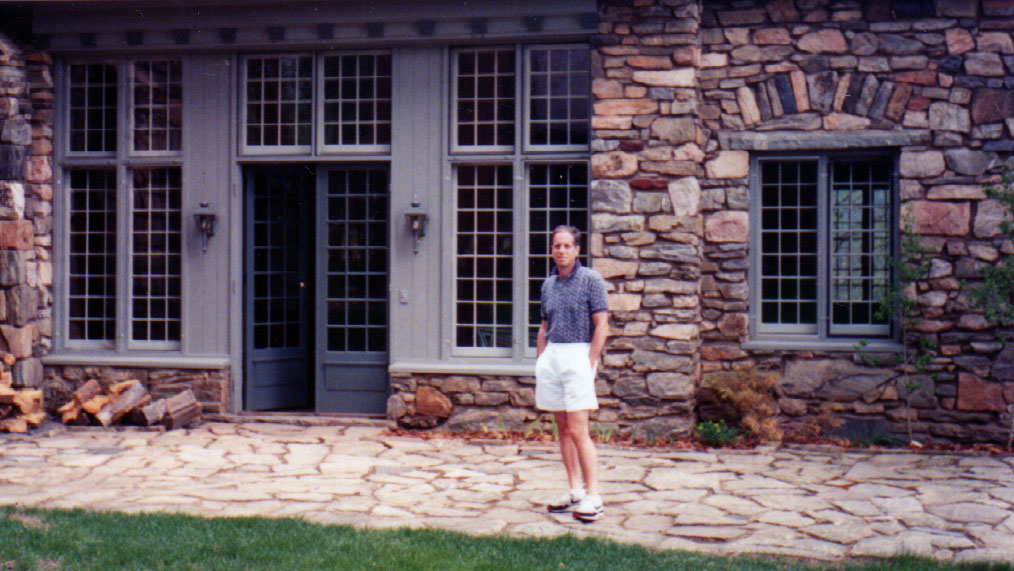 May 1992. Richard Bard stands on the side patio admiring his recent purchase.

In the spring of 1992, after selling their Denver country club home, Richard and Pamela Bard found in Greystone exactly what they had been looking for in a one-of-a-kind estate. Shortly after purchasing it, they set out with plans for renovating the entire property.

The Bards knew that they had an extensive amount of work ahead of them in order to turn Greystone into what they envisioned, restoring the historic charm and grandeur of the “castle in the woods” while updating it to a state-of-the-art modern dwelling. Most of the buildings on the estate remained unchanged since their original construction in 1916. Read more.

Posted in Life at Greystone

Our family spent several summers here in the mid 60’s!
Then we bought a home in Evergreen and it was the best childhood ever!

Thanks for your note! Fun to connect with people that have experienced Greystone, it is such a unique, great place. I will pass your comment onto Pam Bard.

All the best, Kari

Greystone popped into my head today and I though I’d look it up.

I worked for Bill Sandifer as the wrangler in 1976/1978 and there I created many terrific memories. I was a young woman who had just graduated horse shoeing school in Littletin, and was bound to utilize my well established riding and guiding skills as well as my new shoeing skills and Greystone gave me the opportunity.

I lived in the little barn apartment and shared in the additional work of serving food and helping to caretake the property. I remember how moved I was by the beauty of the manor and the architecture. I loved helping to change the bed cloths in the upper bedroom that had the arched windows and half circle design which seemed so grand and special

It was at the time that the elder Sandifer was wheelchair bound due to Parkinson’s and I remember how stately and proud he always attempted to be in spite of his affliction. He was always nice to me.

In closing I’m warmed to find such a beautiful tribute to the history and state of care that you obviously have for the property. I’m grateful to have been a small part of sharing the history and beauty of the estate with guests as I guided them along the trails . Well done and I hope many more fine memories will be created and shared there at Greystone

Thank you so much for sharing your special memories of working at Greystone Ms. Jarboe! If by chance you have any photos from the time you were here we would be honored to add them to our history. It is truly a special place for a Colorado retreat and the memories of those who have spent special times here enliven it even today.

I am trying to track down an old friend from Baltimore. Can you help with contacting Warren A Smith?
Previous addresses are not working and I’m moving to Rome.
Thank you.
J.M.

Hi Julia, I am sorry, but we do not have a contact for Warren Smith. Good luck contacting him and with your move!